We adopted Crumbs in February 2018 to add to our family. Crumbs' background was a bit uncertain, as he was a stray, scared, possessive and a touch aggressive. We had him meet our other pup, Rahja, before finalizing the adoption and things seemed to go okay. However, when we brought him home, he was very food aggressive and startled easily, assuming from his years on the streets. He would try to intimidate Rahja and would chase him away from the food. We started feeding them separately, with high supervision, and eventually they were able to eat together again.

We worked with Crumbs, now Roman, not only on his food aggression but also security in our home. He has had some setbacks, but has made great strides! He is still jumpy at times, and does not like fireworks or hair dryers, but he is doing amazing now that we have recognized his triggers and know how to calm him and make him feel secure.

Rahja and Roman are now friends, brothers, and love to play together and cuddle. They have their squabbles once in a while, but what brothers don't! 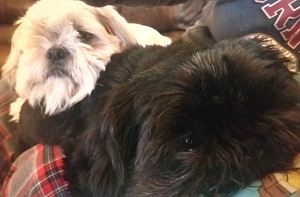