Just wanted to fill everyone in on my special little guy. When my Mom, niece and I went to Petsmart in Latham back in November I had hopped to leave with a little sweetheart, well I got that and much more, in Tim. He was just 4 1/2 months old at the time and special needs too. He along with his sister both have some eye problems. So Tim, now Shadow (because he follows me EVERYWHERE :) ) was the perfect little man for me. I know you're all wondering why, with eye problems?

Well, I too had my share of eye problems when I was younger (which included 7 eye operations!), so Shadow was in fact THE cat for me!! Once we got him home and unpacked all his new goodies he made himself at home and claimed the couch as his own. He loves it here, and I love having him too. I can't imagine my home without him.

Shadow also manages to win over everyone who comes to visit! He received several Christmas gifts from his mommy as well as mommy's friends!! Everyone just loves him. I have to say it's hard to leave him when I have to go to work. Not only do I mean to leave him, but actually get out the door. I keep several toys near the door to distract him as I sneak out, and when I come home guess whose at the door to meet me?! So thank you, thank you for bringing him to the adoption clinic that day!!

PS. (from Shadow)
I hope that someone will adopt my sister soon (if they haven't already). My Mommy would take her if she was allowed to have another kitty. Thank you to everyone at the shelter and my foster mommy for taking such good care of me, and finding my new mommy too!!

This first picture is Shadow the first day home.

This second picture is of Courtney and Shadow taken in January 2006. I know his eyes look funny, but a flash will do that. 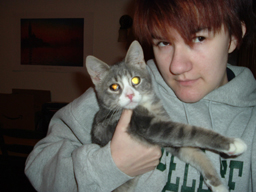