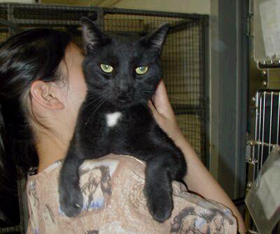 I was a dog lover since birth. Wolves were my favorite animal and I never really cared for cats. Whenever I visited friends who had cats you would never know they had a pet because they usually hid under the couch, etc. But I had been volunteering since I entered college, first in Ithaca, NY, and now in Menands, NY. I would help out in the cat room a lot because there didn't seem to be as many volunteers to spend time with them as there were for the dogs. So here it was that I found myself one Saturday afternoon cleaning out cat cages when one black cat sat in his food. It was caked all over his fur and the poor guy started to meow. I took him out, cleaned him off, cleaned out his cage, and then combed him for a while. Then I put him back, ready to tend to the next little ball of fur, when sure enough, he had already sat in his food again. This was a smart one. I couldn't help but giggle. This time when I took him out and cleaned him up he rolled on his back and exposed his stomach. Did a CAT just do that? Was I seeing straight? I risked a pet. Yup, there was purring. Then he snuggled up against my legs. In a stress filled environment this little guy was being quite the charmer. I had a hard time putting him back this time (and quickly left the room before I could see him sit in more food). I resolved that if I came back next weekend and he was still there I would foster him. You know what I thought about all week? I hoped no one had adopted him! Relief came over me when sure enough, next weekend he was still there. In a different cage but still the same old loveable creature. I took him home that day and by next week (6/26/04) he was officially mine. I kept his original name given to him by his previous owner(s) (I have no idea how anyone could have voluntarily given him up), though I probably should have named him Shadow - another fairly common name for a black cat but it ended up suiting him because when I am home he never leaves my side. When I go into another room, even if he was sleeping, he wakes up, follows me, and then curls up in a ball on my lap or next to me. I never knew I could feel such love, and in addition he has taught me much patience and dedication. I am forever changed and, incidentally, cats are now my favorite animal. 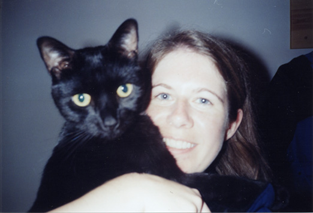 Midnight at home (alert and playful)