To the Mohawk Hudson Humane Society,

My name is Michelle Darcy, and about a year and a half ago my boyfriend (Tim Staniels), and I came in and during a trip to find a dog we came upon a puppy that was separated from all the other animals. When we asked about this puppy, we were told his name was "Fiddy", short for Fiddler (due to a disformed leg). We played with him in the office and instantly fell in love with him. With a front limb disformed he never stopped moving. He moved around and curled up in our laps just giving us kisses upon kisses. We were told he was due to have an operation and have this limb removed but we made sure eveyone new how much we loved him. We came to visit him almost every day till he had his surgery and then the day after the surgery we were able to take him home. Although he seemed scared of everything, the love he received at the Shelter helped form good habits. He was always taken home with one Veterinarian (Barbara) who loved him so much that he picked up amazing habits. Only 2 months old he was already crate trained, never had an accident in the house and he LOVED to cuddle. After a few returned visits, the stitches and drainage tube was taken out. As puppies go he was normal, tripped over his own feet but kid you not, the missing limb NEVER slowed him down. On the first trip to Washington Park, he spent his entire time running around gathering all the dogs to play in one big pile. He was loved by every dog. This puppy made our lives so much better. We can only hope to have done the same for him. We just wanted to write and Thank everyone that helped this puppy and let you know he's loved by everyone. He takes constant trips to Cape Cod and plays on the beach as well as trips to Lake Champlain and plays in the woods and the water. He's now two years old and has lost all his fears of the unknown. He's very smart and picks up on all the quarks of Human nature. He's the fastest and most playful dog around and still LOVES to cuddle, loves all people. At the end of the day he hops up onto our laps and gives us all the love in the world. Thank you so much for the wonderful care and we can't tell you how lucky we are. 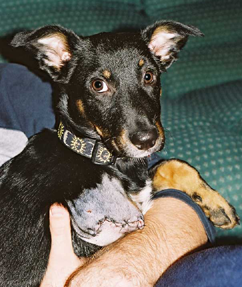 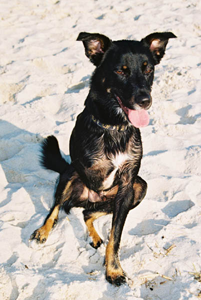