My husband and I had lost our 17 year old tabby, Tweed, to cancer last fall and we were feeling pretty gloomy. We had adopted her as a tiny kitten from MHHS and her death had left a big hole in our hearts. Over many years of being parents to cats, we'd lost quite a few and had always found that adopting again and providing for a homeless cat helped us cope with the grief. In Tweed's memory, we wanted to adopt again from MHHS. Could we get lucky with a wonderful cat like she was?

I pored over the Petfinder listings and read every cat's story. Though no one cat stood out to me, I was sure that one of them would be perfect for us. My husband, who is less willing to admit to being a "cat person", was set to defer to my judgement in selecting a cat. However, once at the shelter, I wanted them all! When he suggested a little 1 1/2 year old black and white female with a somewhat comical half moustache, I readily agreed. She had been at the shelter, then in foster care for some months, and now back at the shelter. She was ready for a permanent home and this home would be with us!

Within hours of getting her home, we could see that she was very sweet, affectionate and playful. Days later, when she was allowed to meet our other two cats and have the run of the house, she quickly made friends with her new brother and sister and adapted quite readily to our household. Today, just over a month later, she is a well-adjusted and happy cat who loves to be cuddled, play with her toys, follow us, and play fetch. She couldn't be more terrific.

We named her Blackberry (she was formerly Deidra) and we thank everyone at MHHS for helping to bring her into our lives.

Thanks and take care,
Mary Anne 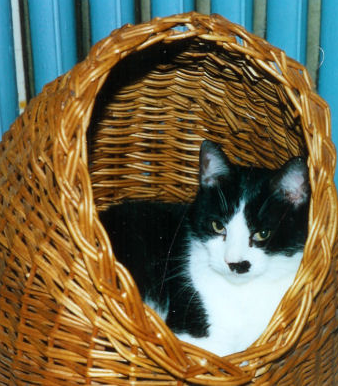